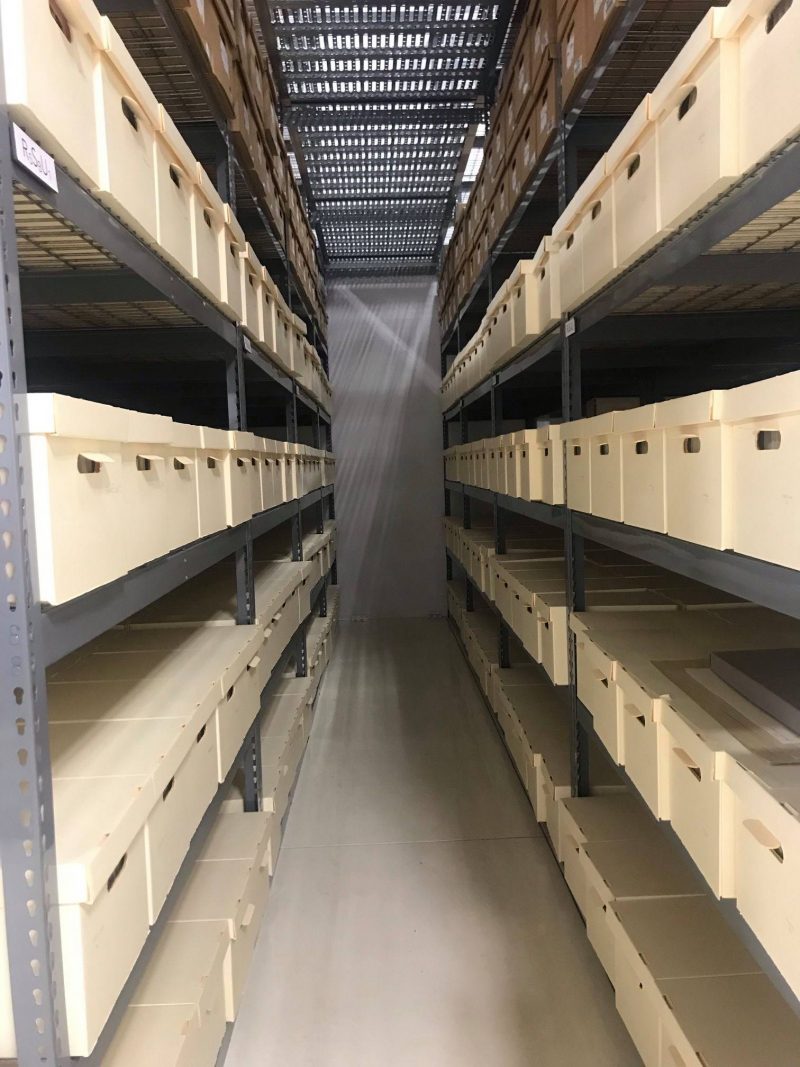 Example of the center’s materials available in the Digital Public Library of America.

The Carl Albert Center archives has joined the global platform, Digital Public Library of America. The DPLA is an all-digital library that aggregates metadata – information describing an item – and thumbnails for millions of photographs, manuscripts, books, sounds, moving images and more from libraries, archives and museums across the United States. The DPLA currently exhibits more than 36 million digital items from America’s libraries, archives, and museums and makes them freely available to the world.

The center’s large-scale digital projects resulted in a digital corpus of more than 6,000 digital items packaged with robust metadata. The projects currently available on the DPLA include the first 25 boxes of the Carl Albert Photograph Collection, the Dick T. Morgan Digital Collection, and the Carl Albert Center Human Rights Archives. To visit the collections, visit http://bit.ly/359GJC4

Undergraduate student employees Alessio Hall and Mark Mayes conducted extensive research in the archives to develop a proposal for the University Libraries Undergraduate Research Award. The research focused on public opinion and constituent letters regarding crime and gun control, and how those shaped Oklahoma and national law. The materials will be publicly available on the Carl Albert Congressional Center Human Rights Archive site (https://www.cachumanrightsarchive.com) which Hall developed and maintains. The project will result in hundreds of fully searchable digital items, readily available for researchers. Elizabeth Dorssom, political science Ph.D. student at the University of Missouri and 2019-2020 Oskar Morgenstern Fellow through the Mercatus Center at George Mason University, visited the center in the summer of 2019. She consulted the Edwards, English, Jones, Steed, and Synar collections for her research on the impact of legislative resources on policy adoption. Specifically, she explored the adoption of sunset laws at the state level and discovered that states with highly professionalized legislatures are more likely to utilize such oversight mechanisms. Despite the success and popularity of sunset legislation at the state level, however, the federal government has never passed a sunset law. Dorssom used the information gathered during her visit for her paper “Legislative Professionalism and Influence on Lawmaking” which she presented at the Southwestern Political Science Association conference in San Diego, California. Additionally, she also revised a conference paper and submitted it for review. Megan Alexander, anthropology Ph.D. candidate at the University of California, Los Angeles visited the Center in fall 2019 to conduct research for her dissertation “Building More Than an Economy: American Law, Land and Choctaw Economic Development in Oklahoma.” Across the United States, American Indian economic development has changed drastically the lives of Indigenous and non-Indigenous people alike. Oklahoma, in particular, has benefited from Indigenous nations which have created industries to provide for their people and ensure their self-determination as sovereign nations.

Alexander’s dissertation examines the ascendency of American Indian economic development as a political-legal phenomenon rooted in a struggle over land. Using archival and ethnographic methods, she is examining how Indian land restrictions and taxation laws have developed and shifted over time, and enabled the state of Oklahoma to gain and exercise political authority over Choctaw Nation and its lands – which Choctaws have always resisted. In turn, the political struggle over managing Choctaw land has fundamentally influenced the trajectory of Choctaw economic development and created massive challenges in the lives of Choctaw families and citizens who face land dispossession from their individual allotments.

To further identify problems Choctaws faced regarding land during the mid-twentieth century, Alexander examined Carl Albert’s correspondence regarding Indian Affairs in Oklahoma. As the Oklahoma District 3 House Representative, Albert was often a first point of contact for Choctaw and Chickasaw individuals seeking aid regarding land ownership. Corroborating Bureau of Indian Affairs files housed at the National Archives and Albert’s correspondence files helped Alexander pinpoint Indian land restriction and taxation laws as a source of strife for Choctaw families – which Albert worked to mitigate as best as he could. The finding also helped Alexander discover difficulties for the Choctaw Nation in influencing the local economy post-Oklahoma statehood. Alexander aims to understand how Choctaw sovereignty has always existed and continues to exist.

About the Visiting Scholars Program

The center’s Visiting Scholars Research Grant Program provides funding for on-site research in the Congressional Collections to support the creation of monographs, journal articles, books, theses, and dissertations. Primary emphasis is placed on research proposals centered on the U.S. Congress and its members, but given the wide-ranging subject matter of the archival holdings at the Center, other topics are considered. Program applications are accepted on a rolling basis. For more information, visit http://www.ou.edu/carlalbertcenter/congressional-collection/vsp.

Editor’s Note: David Morgan is the great-grandson of Dick T. Morgan, who was a key figure in the early years of Oklahoma statehood. Among other achievements, Dick Morgan represented Oklahoma’s 2nd District in the U.S. Congress from 1909 to 1915 and the 8th District from 1915 to 1920. In 2019, David Morgan gave 20 presentations in 14 cities and towns across Oklahoma about his great-grandfather, and these are his reflections about his experiences. Learn more about Dick T. Morgan and view his collection at https://dicktmorgan.omeka.net/.

When I think about my lectures and talks in 2019, I think of the places I went, the people I met, the discussions we had, the things I have discovered about Oklahoma, and the information I gathered from the research about my great grandfather and other family members. To make things simple, I’ll just refer to my great-grandfather as “Dick.” In 2019, I gave 20 presentations in 14 different towns and cities in what was the old Oklahoma Territory. This covers essentially the western half of the state of Oklahoma – from Shawnee in the southeast, to Ponca City in the northeast and all the way northwest to Guymon in the panhandle. I visited Alva, Enid, Gage, Goodwell, Guthrie, Guymon, Norman, Oklahoma City, Perry, Ponca City, Shawnee, Stillwater, Woodward and Yukon. These are mostly towns and locations where Dick lived and/or represented in Congress, and they were all fun to visit.

I presented talks to civic clubs (10 of them Rotary Clubs), college classes and groups, museum groups and a genealogy society. I presented in areas with varying population sizes ranging from the Oklahoma City metro area, to Enid, Stillwater and the small town of Gage (population fewer than 450). Most groups I visited had between 15 to 30 people in the audience, and one location had more than 90 people.

Dick’s first home in Oklahoma was in Guthrie – the Territorial capital and early rival of Oklahoma City as the most prominent city in Oklahoma. I gave my presentation to the Rotary Club in Guthrie just around the corner, and only a few hundred feet, from where Dick’s office was located 130 years earlier. Two presentations were in Perry – one within a block or two of Dick’s offices on the town square. Dick was one of the founders of the Christian Churches in both Guthrie and Perry. I made an effort to visit the Christian Church (Disciples of Christ) in each town, and had several opportunities to talk to the head pastor. Although I have often traveled around the state of Oklahoma, this was the first time I visited Gage, Alva, Ponca City or Goodwell. I visited museums in Perry, Alva, Woodward, Enid and Goodwell. The museums in Perry and Woodward have planned exhibits of Dick’s life and the others are working on exhibit dates. I primarily visited county seats which gave me the opportunity to walk around the court house and the town square, and get a sense of the early history of Oklahoma Territory.

As you would expect, my best memories are of the people I met along the way. Dick represented more homesteaders than any other attorney in Oklahoma Territory, and many of the people I met were descendants of those homesteaders. Everybody had a story, which I encouraged them to share. It is likely that many of their ancestors were Dick’s clients who likely read the books he wrote on homestead law, and almost all were constituents during his Congressional years. The seniors showed special interest in the story of early Oklahoma Territory. In Ponca City, every person in attendance had a question or comment about my presentation. At the other end of the spectrum were the college students I met. One group was an upper level speech class at Oklahoma City University. There were very attentive and I was surprised about the parts of my presentation which were particularly moving to them. They especially liked the story of Dick’s “love” letter to his wife after he had been told that he was not going to be appointed Governor of Oklahoma Territory. The students also liked the story shared at Dick’s memorial service by his colleague. He recounted how Dick missed an important reception given by a high official of Congress because it was held on a Sunday and Dick would not attend public receptions on the Sabbath.

I truly enjoyed learning more about my great-grandfather, as I researched stories about his life and positions on important issues. I am proud of the positions he took on political rights and voting rights for all citizens which he expressed in opposing the Oklahoma state constitution and opposing the Grandfather Clause Amendment. I am proud of his dedication to promoting rights for homesteaders, farmers, consumers, soldiers and veterans. Even on the issues where I would have opposed his positions, such as Prohibition or his support of limiting press freedom during World War I, I understand and appreciate the reasons for his beliefs. One thing which completely surprised me was the interest of small-town newspapers in my speaking tour. There were six featured stories reporting on the presentations, four of which were front-page articles. The articles were very well written, and I told one reporter that I thought her report was better than my presentation. The Carl Albert Center has collected each of these articles that can be accessed through its website at https://dicktmorgan.omeka.net/collections/show/12.

Perhaps the best example showing the reception to Dick T. Morgan’s story was a quote from an article in The Red Earth, a publication of the Plains Indians & Pioneers Museum in Woodward, “Of all the actors upon the stage that made up territorial and post-statehood Northwest Oklahoma, there are none that come close to matching the accomplishments and the lifetime of service of Dick Thompson Morgan.” 2019 was certainly a fun and meaningful year.