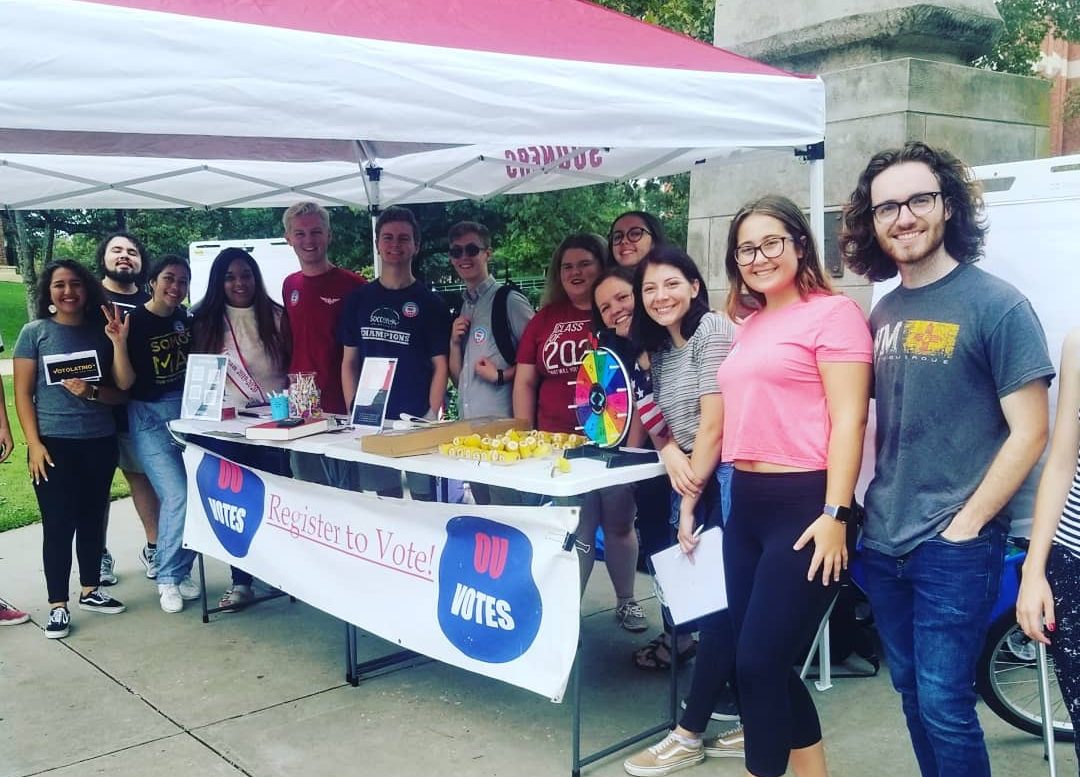 The Center hosted a very successful 2019 Rothbaum Distinguished Lecture in Representative Government on Oct. 22-24, 2019. Bruce E. Cain, award-winning professor of political science at Stanford University and the Spence and Cleone Eccles Family Director of the Bill Lane Center for the American West, was the distinguished lecturer. His topic was “The Politics of Adapting to Climate Change in the American West” and the daily lectures were “Climate Politics in the West: Is Red the New Green?”, “The Potential Opportunities of Climate Catastrophe,” and “Climate Change Creep and Political Inertia.” Links to the presentation slides and videos are located at http://www.ou.edu/carlalbertcenter/events/rothbaum-lecture/2019-lecture—bruce-e–cain

Nara Park won the 2019 Carl Albert Dissertation Award for Best Dissertation in Legislative Studies for “The Nature of Japanese Governance: Seikai-Tensin (政界転身)’s Political Success in Postwar Japan, 1947-2014.” Park received her Ph.D. from the University of Chicago in 2017, and at the time of the award, was a research professor at the Yonsei University Institute of State Governance in Seoul, South Korea. The award is presented by the American Political Science Association’s Legislative Studies Section and is sponsored by the Carl Albert Center. Director Mike Crespin and associate director Chuck Finocchiaro were on hand to congratulate professor Park at the APSA Annual Meeting in Washington, DC in August. This fall, the Center welcomed new graduate fellow Peter McLaughlin. McLaughlin previously earned a B.A. in Government and International Studies from Dartmouth College in 2016 and a M.P.A. from Drake University in 2019. From June of 2016 to December of 2018 he served as the research director for Vote Smart, a nationwide voter education nonprofit.

The 2018-2019 Civic Engagement Fellows, Carson Ball, Stephen Cromwell and Madison Morrow, had an extremely successful year and worked with director of N.E.W. Leadership and civic engagement, Lauren Schueler, to create foundation for a new student organization called Oklahoma Votes. Oklahoma Votes is a student-led effort designed to focus on student voter registration, education and mobilization. Oklahoma Votes coordinates efforts between various student organizations, departments and colleges on campus and is sponsored by the Carl Albert Center.

From July 1 to Oct. 11, 2019 Oklahoma Votes coordinated a campus-wide voter registration drive as part of the Oklahoma State Regents for Higher Education and Oklahoma Campus Compact’s Voter Registration Competition. OU competed against Oklahoma City Community College, Oklahoma State University, Tulsa Community College and the University of Central Oklahoma to achieve the greatest percentage of student body registration for both in-state and out-of-state students. In December, Oklahoma Votes was presented with two first-prize awards for registering the most out-of-state students (125), and the most in-state students in our division (703). In August 2019, Schueler was awarded a $24,645 grant from the Students Learn Students Vote Coalition to partner with Oklahoma Campus Compact to host a voting summit for Oklahoma college students and administrators. Oklahoma is one of the least civically-active states for college students in the nation, and the summit will promote civic engagement and impart institutional knowledge to leaders of 38 colleges and universities across the state.

The summit will present information on the voter registration process and unique laws and processes related to voting in Oklahoma, share best practices for voter education and examples of programming, and facilitate the creation and use of campus plans. The summit will feature voting practitioners and activists, plus county and state officials to discuss how universities and community colleges can best work with their public servants. The summit is scheduled for summer of 2020.

In fall of 2019, Oklahoma Votes hosted two debate watch parties in partnership with OU College Democrats and OU’s Headington College. The events took place on Sept. 12 and Oct. 15 and were well attended by students eager to play debate watch bingo and learn more about the candidates. In addition to voter registration and watch parties, Oklahoma Votes will host politics and pizza sessions and share information about upcoming elections. Visit bit.ly/OKVotes for important information about voter registration, upcoming events and more. The Civic Engagement Fellows and Oklahoma Votes received a $400 mini-grant to participate in a campus takeover for National Voter Registration Day on Sept. 24, 2019. The Center partnered with OU’s Student Government Association, Voto Latino organization, Student Leftist Union and Oklahoma Intercollegiate Legislature to host the day’s registration efforts. The event was very successful and 216 students registered to vote on the Norman campus. OU joined 4,083 community partners who registered over 400,000 people across the country during the one-day event.

Each spring, the center offers the Capitol Scholars service-learning class in which students are placed in assignments with the Oklahoma legislature, state agencies, interest groups or the media, and are expected to work about 16 hours a week. The spring 2019 Capitol Scholars were Carson Ball, Natalie Bayer, Dakota Brooks, Taylor Crossley, Tony DeSha, Destinee Dickson, Elaina Fees, Devin Hiett, Hayley Lim and Daniel Williams.

During the fall semester, seven undergraduate students participated in the Community Scholars program, a public service-learning opportunity. The students worked 18 hours per week in a nonprofit or public agency in the Norman area where they developed professional experience and skills, and learned how organizations function and interact with the broader community. The students also attended weekly seminars and briefings with leaders from the nonprofit and public service sectors. The 2019 Community Scholars were Hannah Bigbee, Alexis Franco, Cecilee Whitnah, Miles Francisco, Maribel Hernandez, Matthew Heideman and Vanessa Munoz.

The center is grateful to the Schwartz Family Foundation for its continuing support of Community Scholars with a $10,000 grant to provide student stipends.

On March 6, 2020 Daniel Pae will receive the OU College of Arts and Science’s 2020 Young Alumni Award for his exemplary leadership, service and character. Pae is a former Capitol Scholar and Undergraduate Research Fellow, and graduated from OU in 2017. After graduation, Pae returned to his hometown of Lawton, Oklahoma where he was elected to the state legislature. He currently serves as state representative for Oklahoma House District 62. Pae has also been recognized as the Oklahoma Public Employees Association’s 2019 Freshman Legislator of the Year, received the 2019 Rising Star Award from the International Leadership Foundation and was named a member of the 2019 NextGen Under 30 class.

In August, Director Mike Crespin and associate director Chuck Finocchiaro attended the APSA conference in Washington, DC and also visited the offices of several members of Congress. They met with staff members and discussed the center’s resources and programs, and also met with several center’s alumni who were working on Capitol Hill.

JA Pryse, senior archivist of the Carl Albert Center, recently received two awards for his community outreach efforts and contributions. In August, Pryse received an award from the Pioneer Library Board of Trustees in recognition of his work with library patrons during the previous year. In September, Pryse will receive the Certificate of Recognition the Oklahoma Museums Association recognizing his contribution to the community.

Pryse was also selected to attend a Specialized Data Curation workshop on Nov. 5-6, 2019 at Washington University in St. Louis. The workshop was hosted by Penn State University Libraries through a grant from the Institute for Library and Museum Services. The program seeks to build and extend capacity for advanced data curation among academic library staff nationwide. Center staff and students gather with OU Parking and Transportation staff and Santa, after donating 21 bicycles and helmets to OU’s 2019 Fill the Trolley event.